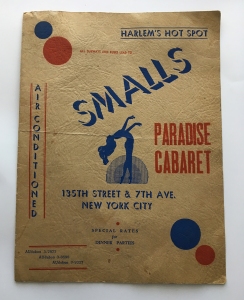 This menu is from the nightclub that Malcolm X describes affectionately in his autobiography. Malcolm X worked there as a day waiter between 1942 and 1943. At Smalls, Malcolm makes a good impression on the customers and on his employers, and learns various hustling techniques, the etiquette of the Harlem underworld, and the history of the neighborhood. With his tips, Malcolm begins to invest a lot of money in the numbers racket, the popular unofficial lottery in Harlem. He learns the names and faces of the young numbers runners as well as those of the “old heads,” black gangsters left over from the 1920s and 1930s. Malcolm also meets an assortment of pimps, including one known as Sammy the Pimp, who soon becomes his best friend and sole Harlem confidant.

“Every day in Small’s Paradise Bar was fascinating to me. And from a Harlem point of view, I couldn’t have been in a more educational situation. Some of the ablest of New York’s black hustlers took a liking to me, and knowing that I still was green by their terms, soon began in a paternal way to ‘straighten Red out.'” –Malcolm X (Autobiography of Malcolm X)

The first time Malcolm walks into Small’s it is afternoon, and the only patrons are powerful hustlers and gangsters, men with no daytime job in the usual sense. Malcolm is struck by “their conservative clothes and manners.” He considers that “ten Boston Negroes—let alone Lansing Negroes” would make a lot of noise drinking. The men in Small’s, on the other hand, only make a “low murmur of sound.” Finally Malcolm praises the Harlemites in the same terms he once reserved for black men in the Roxbury ghetto: “Their manners seemed natural; they were not putting on any airs.” Now it is the men of Roxbury who seem loud and affected to Malcolm. The quiet men of Harlem in their conservative suits are the natural ones.

Once again Malcolm is impressed with a different caste of black people, and once again he is proved wrong. The contrast between loud Boston and quiet, powerful New York turns out to be false. At night the men and women with day jobs show up at Small’s. They are as loud and flashily dressed as anyone in Roxbury. But this one lesson stays with Malcolm. He has seen into another hierarchy, the quiet, powerful men who run Harlem, men who sit outside the white power structure. He starts to emulate them, and he succeeds.

Smalls Paradise was located in the basement of 2294 Seventh Avenue, it opened in 1925 and was owned by Ed Smalls. At the time of the Harlem Renaissance, Smalls Paradise was the only one of the well-known Harlem night clubs to be owned by an African-American and integrated. Other major Harlem night clubs admitted only white patrons unless the person was an African-American celebrity.

The entertainment at Smalls Paradise was not limited to the stage; waiters danced the Charleston or roller-skated as they delivered orders to customers. Waiters were also known to vocalize during the club’s floor shows. Unlike most of the Harlem clubs which closed between 3 and 4 am, Smalls was open all night, offering a breakfast dance which featured a full floor show beginning at 6 am.

Civil rights activist Doctor W. E. B. Du Bois celebrated his 83rd birthday at Smalls Paradise on February 23, 1951. The banquet, sponsored by Albert Einstein, Mary McLeod Bethune, Paul Robeson and others, was originally to be held at New York’s Essex House. This was during the era of McCarthyism; a pro-McCarthy group circulated a newsletter labeling Du Bois, Einstein and others connected with the dinner as being pro-Communist. When the Essex House canceled the banquet, it was held at Smalls Paradise.