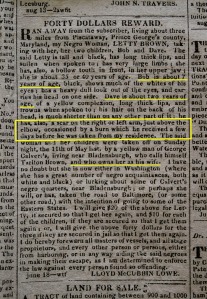 This September 6, 1828 edition of The National Intelligencer (Washington D.C.) has a total of 5 slave ads. The first offers “FORTY DOLLARS REWARD” for “my Negro Woman, LETTY BROWN, taking with her, her two children, Bob and Dave…she is about 35 or 40 years of age.  Bob is about 7 years of age…and carries his head on one side.  Dave is about two years of age, of a yellow complexion…he has, also, a scar on the right or left arm, just above the elbow, occasioned by a burn which he received a few days before he was taken from my residence.  The said woman and her children were taken off on Sunday night…by a yellow man of George Calvert’s, living near Bladensburgh, who calls himself Tarlton Brown, and who owns her as his wife.”

Another advertisement says “For Sale, for life, within the District, A LIKELY YOUNG NEGRO GIRL, of good family habits, about ten years of age.  Sold for no fault, the owner having no use for her. NATHANIEL P. POOR.

Another runaway advertisement, ALSO IN THE August 30, 1828 National Intelligencer (separate post in this collection), states “FIFTY DOLLARS REWARD” for SYE “When he left home had a swollen face and a cut finger occasioned from an attack made by him on his overseer a few days before he absconded.  His wife is living in Washington City….In all probability he will be lurking about the City near his wife.” 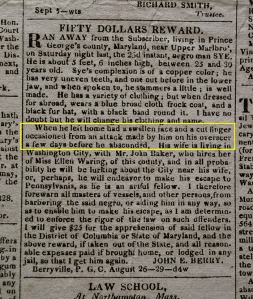