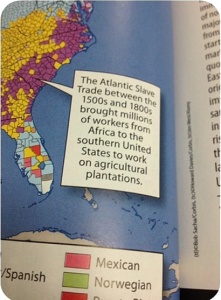 In Chapter 5 titled “Patterns of Immigration”, this 2016 World Geography textbook from McGraw Hill says “The Atlantic Slave Trade between the 1500’s and 1800’s brought millions of workers from Africa to the southern United States to work on agricultural plantations.”  It also says “One of the defining attributes of the United States is that it is largely a country of immigrants and their descendants.  About 13 percent of people in the United States are foreign born, while Native Americans, Alaska Natives, and Native Hawaiians make up about 2 percent of the population.  The remaining population is descended from immigrants.”  Here is the story of how everything “hit the fan” when an African-American mother looked carefully at her son’s geography textbook…

Mothers of teenagers are used to getting frustrating text messages, but the one that Roni Dean-Burren received from her 15-year-old son last week wasn’t about alcohol, dating or money for the movies.

It was about history.

Her son, Coby, had sent her a photo of a colorful page in his ninth-grade McGraw-Hill World Geography textbook. In a section titled “Patterns of Immigration,” a speech bubble pointing to a U.S. map read: “The Atlantic Slave Trade between the 1500s and 1800s brought millions of workers from Africa to the southern United States to work on agricultural plantations.”

“We was real hard workers wasn’t we,” Coby retorted in a subsequent text.

The image alarmed Dean-Burren, who was an English teacher for 11 years at the Pearland, Tex., public high school that her son attends. Now a doctoral candidate in the University of Houston’s Language Arts program, she has spent much of her life thinking about the power and dangers of nuanced language. The motive behind the textbook’s choice of words seemed clear.

“This is erasure,” Dean-Burren said in an interview with The Washington Post. “This is revisionist history — retelling the story however the winners would like it told.”

In calling slaves “workers” and their move to the United States “immigration,” she noted in viral Facebook posts Wednesday and Thursday, the textbook suggests not only that her African American ancestors arrived on the continent willingly, but also that they were compensated for their labor. Coby Burren is a ninth-grader at Pearland High School near Houston. (Danyeal Dean-Grays)

McGraw-Hill Education sought to redress these implied untruths in a Facebook announcement Friday. While the geography program “meets the learning objectives of the course,” the publishing company’s statement said, a close review of the content revealed that “our language in that caption did not adequately convey that Africans were both forced into migration and to labor against their will as slaves.”

“We believe we can do better,” it continues. “To communicate these facts more clearly, we will update this caption to describe the arrival of African slaves in the U.S. as a forced migration and emphasize that their work was done as slave labor.”

The changes will be made in the textbook’s digital version and included in its next run.

[Texas officials: Schools should teach that slavery was ‘side issue’ to Civil War]

While McGraw-Hill’s action came swiftly, it was after tens of thousands of people had already expressed their outrage on social media. By the time Dean-Burren received news of the company’s response, her video contemplating the textbook’s impact had garnered half a million views.

Dean-Burren has mixed feelings about the outcome. “On a surface level, ‘yay,’” she said. “I understand that McGraw-Hill is a textbook giant, so thumbs up for listening.”

On the other hand, few students use the digital version, and as her son’s textbook is brand new (copyright year 2016), another print version likely won’t come out for another ten years, Dean-Burren said.

She called on McGraw-Hill to rise to its own professed standard: “I know they can do better. They can send out a supplement. They can recall those books. Regardless of whether you’re left-leaning or right-leaning, you know that’s not really the story of slavery.”

Referencing her use of #BlackLivesMatter on Facebook, Dean-Burren added, “Minimizing slavery in any way is a way of saying those black lives, those black bodies, that black pain didn’t matter enough to give it a full description.”

The educational publisher has been criticized for its Texas materials before. McGraw-Hill was one of a handful of textbook providers that came under fire after the Texas State Board of Education adopted new standards for its social studies curriculum in 2010 — a policy that educators derided for interfering with accurate history instruction.

A Washington Post article published after the changes received preliminary approval noted that a lesson plan devised under the proposed mandate “plays down the role of Thomas Jefferson among the founding fathers, questions the separation of church and state, and claims that the U.S. government was infiltrated by Communists during the Cold War.”

While the changes were only made to books sold in Texas, some feared that the state’s large market would make the revised texts instant bestsellers, thereby encouraging other school districts to follow suit. As recently as last year, scholars reviewing textbooks based on the Texas Essential Knowledge and Skills guidelines found a number of historical misrepresentations, among them several in McGraw-Hill’s proposed textbooks. These issues included declaring that a Muslim garb hinders women’s rights, palliating the inequalities African Americans faced under Jim Crow and representing slavery as only a secondary cause of the Civil War.

Most of the textbooks found to be problematic were nevertheless approved.

Southern Methodist University history professor Edward Countryman told NPR in an interview this summer that including no more than a cursory nod to race and slavery in textbooks does students a disservice.

“It’s kind of like teaching physics and stopping at Newton without bringing in Einstein,” said Countryman, who reviewed some of the Texas books for this school year.

As it so happens, McGraw-Hill’s description of the Atlantic slave trade has had a positive educational impact on at least one student.

Shortly after the publisher’s response, Dean-Burren and her son were sitting next to each other on the couch when Coby started dialing his mother’s cell phone number.

“Why are you calling me?” she asked, confused.

He urged, “Answer your phone.” Speaking into his, Coby fulfilled a request that Dean-Burren made when her son started high school.

“Mom,” he said, “you told me to call you when I realized I could change the world.”