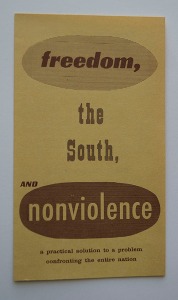 This 1950’s pamphlet “Freedom, the South, and Nonviolence” was published by Fellowship of Reconciliation. It is a plea for funding to support those boycotting the buses in Montgomery, Alabama.  It states, “In the immediate present, it has been demonstrated dramatically by thousands of Negroes in Montgomery, Alabama, as they have trudged the streets of that city, and organized a complicated system of carpools, rather than submit any longer to segregation on the city’s buses.  India’s millions, led by Gandhi, and Montgomery’s thousands, led by twenty-six Negro clergymen, have demonstrated how nonviolent resistance operates at its best….Where such campaigns begin, send your own words of encouragement and support to its leaders.  Let them know that you understand their goals and their methods, and that you are praying for their success.  The knowledge that thousands of other Americans are with them can mean a great deal to men and women surrounded by hostility and opposition.”

“A national staff member of the Fellowship has spent two weeks in Montgomery, giving what help he could to the leaders of the movement and mobilizing white understanding and support for it.  In the coming weeks, two staff members–themselves an interracial team–will spend a concentrated period of time in Alabama, helping to explain nonviolent resistance at Negro colleges and in white churches, encouraging white Christians to cast off their fears and prejudices and come over to the side of brotherhood.”

Martin Luther King’s relationship with the Fellowship of Reconciliation (FOR) began during the Montgomery bus boycott, when FOR veteran Bayard Rustin and FOR national field secretary Glenn E. Smiley came to Montgomery, Alabama, to help support local efforts to challenge racial segregation nonviolently. King also developed a cordial relationship with former FOR chairman A. J. Muste, whose absolute pacifism King had questioned while a student at Crozer Theological Seminary.

Pacifist Christians in England and Germany founded FOR at the outbreak of World War I as a way of working toward peace while their countries were at war. The U.S. chapter of FOR was established in 1915 and worked to support conscientious objectors. After the war, the organization expanded its mission to work for labor rights and an end to racism. FOR members helped create other organizations dedicated to anti-racism and national self-determination work, including the Congress of Racial Equality and the American Committee on Africa.

Early in his public career, King’s understanding of Gandhi’s ideas expanded following spring 1956 meetings with Rustin and Smiley, two FOR affiliated activists who had pioneered the application of Gandhian techniques to American race relations. Rustin, who until 1953 had been a race relations secretary for FOR, spent a week in Montgomery, Alabama, in the early months of the bus boycott and shared his expertise in nonviolent theory and practice during strategy meetings of the Montgomery Improvement Association. Smiley arrived in Montgomery shortly after Rustin and was initially unimpressed by King’s understanding of Gandhian nonviolence but gave him several books on the subject. After his early contacts with Rustin, Smiley, Homer Jack, Muste, and other proponents of Gandhian nonviolence, King became more likely to refer explicitly to Gandhi’s teachings. Eager to publicize the Montgomery bus boycott’s successful use of nonviolent techniques, FOR produced a documentary film entitled ‘‘Walking to Freedom,’’ and a comic book titled ‘‘Martin Luther King and the Montgomery Story.’’

Former FOR staffers continued to offer training on nonviolence throughout the South after the boycott ended. FOR veteran James Lawson, based in Nashville, Tennessee, was especially prominent, offering workshops to participants in the Freedom Rides, church groups, and college students.

Although FOR members remained active in civil rights issues, in the mid-1960s the organization turned its attention to the Vietnam War. Through Muste, FOR encouraged King to speak out against the war and introduced him to anti-war activists such as Thich Nhat Hanh, whom King nominated for the 1967 Nobel Peace Prize. FOR raised money for medical aid to victims of the war in Vietnam and advocated the release of Vietnamese political prisoners.