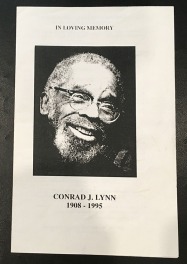 Conrad Lynn participated in the first Freedom Ride, and was the first to be arrested among the group. Later, Lynn became involved in the highly publicized North Carolina “Kissing Case”, involving a pair of African-American boys, 7 and 9 years old, who were jailed, prosecuted and convicted of rape, and sentenced to reform school until age 21 after they playfully kissed (or were kissed by) a white girl their age as part of a game. Lynn later represented the Harlem Six. This collection includes Conrad Lynn’s funeral program, a framed print (with his face among other historic figures), his “American’s for Change” card, his health insurance card, and a personal letter to him from a friend. 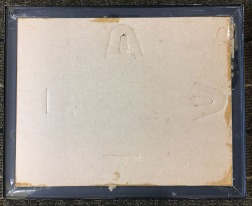 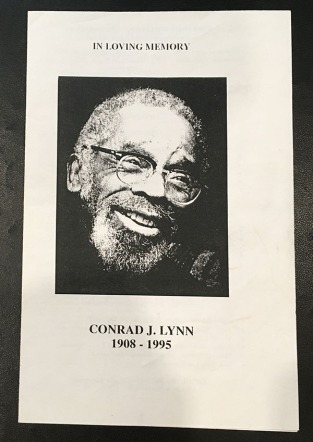 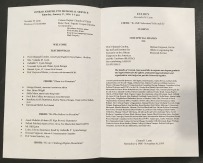 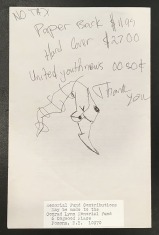 In April 1947, Lynn participated in the Journey of Reconciliation, a challenge to Jim Crow laws that later came to be considered the first “freedom ride” of the American civil rights movement; it was a forerunner to the Freedom Rides of the early 1960s. Sixteen civil rights activists, eight of them black and eight of them white, boarded Greyhoundand Trailways buses and traveled through Virginia, North Carolina, Kentucky, and Tennessee to bring public attention to the reality of racial segregation and dramatize the South‘s widespread disregard of the 1946 U.S. Supreme Court decision Irene Morgan v. Commonwealth of Virginia. This held that the U.S. Constitution barred racial segregation in interstate transportation.

Lynn was the first of the group to be arrested, for sitting in the white section of a Trailways bus departing from Richmond, Virginia. Lynn told the bus driver that the Supreme Court had ruled against segregation on interstate buses, but the driver responded that his employer was Trailways, not the Supreme Court, and he was following Trailways rules. After being released on bail in Richmond, Lynn traveled to Raleigh, North Carolina, where he joined his colleagues on the bus and completed the journey.[4]

In 1958, Lynn became involved in the highly publicized North Carolina “Kissing Case”, involving a pair of African-American boys, 7 and 9 years old, who were jailed, prosecuted and convicted of rape, and sentenced to reform school until age 21 after they playfully kissed (or were kissed by) a white girl their age as part of a game. The National Association for the Advancement of Colored People (NAACP) could not enlist any of its attorneys to represent the boys and referred the case to Lynn. After learning that the boys had already been convicted and sentenced by a county juvenile court judge without having either legal counsel or an opportunity to confront their accusers, as required by the Sixth Amendment to the Constitution, Lynn appealed the conviction, but without result. He then contacted former First Lady Eleanor Roosevelt for assistance; she urged President Dwight Eisenhower to intervene in the situation. As a result of these efforts and international attention that Lynn and others generated for the case, which was embarrassing for the US government, after three months’ detention the boys were pardoned by the governor of North Carolina and released.

The “Kissing Case” was Lynn’s first collaboration with North Carolina civil rights activist Robert F. Williams. In 1959, Lynn protested Williams’ suspension from the NAACP, and urged the organization to adopt a more “militant program”. Lynn later represented Williams as his lawyer during the 1960s, when Williams, who had become increasingly militant, exiled himself in Cuba, China, and Tanzania to escape prosecution in the United States for a charge of kidnapping. Lynn visited Williams in Cuba.

In the mid-1960s, Lynn teamed with attorney William Kunstler to represent the Harlem Six (six black teenagers) in appealing their murder conviction for robbing a secondhand store and killing one of the store’s proprietors. The two attorneys believed that the teenagers had been framed. In the appeal filed in 1965, Lynn and Kunstler asked for the convictions to be overturned on the grounds that the Six had not had competent legal counsel for their trial. The convictions were reversed for a different reason – that some trial evidence had been inappropriately admitted. Retrials were ordered, beginning in November 1970, when two of the Six were retried. Lynn and Kunstler revealed their discovery that two prosecution witnesses had committed perjury in the first trial. After the trial concluded, the jury reported that it could not reach a verdict, so the trial was declared a mistrial. After another trial was held, again ending in a mistrial, the defendants were allowed to plead guilty to manslaughter in exchange for their immediate release from confinement.