This 1907 book The Negro, A Menace to American Civilization, was written by Robert Wilson Shufeldt who was a Major in the Medical Department of the U.S. Army. From the book:“It takes a negro to assault a pretty and winsome little girl less than four years of age….It is scarcely necessary for me to say, that I am morally opposed to all forms of lynch law, but the negro is with us ; savagery and barbarous acts beget savagery and barbarous acts….Lynchings, in spite of everything, will continue to occur in the United States of America just so long as there is a negro left here alive, and there is a white woman living for him to assault. He can no more help his instincts than he is responsible for the color of his skin.”  Note the lynching photos.

The book is dedicated to a colleague (see photo) and his “sincere effort he once made to maintain the purity of the race, of which he was so distinguished a representative.”

Other tragic quotes from the book…

“The negro in fact has no morals, and it is therefore out of the question for him to be immoral — the Rev. Dr. Tucker is quoted as having said at the American Church Congress for that year, that he knew of whole neighborhoods ” where there is not one single negro couple, whether legally married or not, who are faithful to each other beyond a few weeks. In the midst of a prayer-meeting I have known negroes to steal from each other, and on the way home they will rob any hen-roost that lies conveniently at hand. The most pious negro that I know is confined in a penitentiary for an atrocious murder…”

“(The Negro is) ready at any and at all times to do his share in debasing the blood of the white race in America. There is no greater danger assailing American civilization than this.”

Regarding skin: “…the outrageous odor it emits, especially under heat and excitement. This is sometimes so strong that I have known ladies of our own race brought almost to the stage of emesis when compelled to inhale it for any length of time.”

“The “problem” is far graver; the number of negroes far greater; and the means of ridding ourselves of these black parasites immeasurably more difficult.”

“no white woman, no white girl, and, in fact, no white child can, with any safety at all, venture out alone in those districts and places where negroes have more or less full sway.”

“It is the presence of the negro among us that is responsible for lynch law, and not the tastes of our people for such brutal
horrors.”

R.W. Shufeldt (1 December 1850 – 21 January 1934) was an American osteologist, myologist, museologist and ethnographer who contributed to comparative studies of bird anatomy and forensic science. He held racist views and was a proponent of white supremacy.  A scandal created by him and causing the divorce of his second wife, the grand-daughter of the famous ornithologist John James Audubon, led to a landmark judgment by the Supreme Court of the United States of America on the subject of alimony and bankruptcy.

Name and address of previous owner (pictured) is inscribed on one of the first pages. 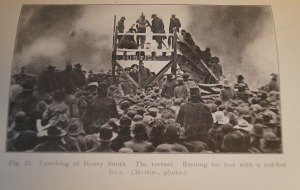 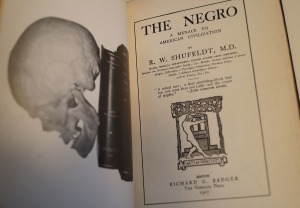