“Darkie Toothpaste” shows one of the more obvious caricatures of the grinning, wide-eyed African-American.  Toothpaste bottle and box are from Japan.

Darky, or darkie, is a term used primarily in the United Kingdom and United States to refer to black people, and is now generally considered a racial slur. The package featured an image of a wide-eyed, smiling dark-skinned black male wearing a top hat, monocle and bow-tie.

After the Colgate acquisition the toothpaste continued to be sold in some Asian countries, including China, Malaysia and Thailand where its brand and logo are not considered offensive. Colgate announced the product would not be sold outside of Asia.  According to a 1989 article, the toothpaste held 75 percent of the market in Taiwan, 50 percent in Singapore, 30 percent in Malaysia and Hong Kong and 20 percent in Thailand. 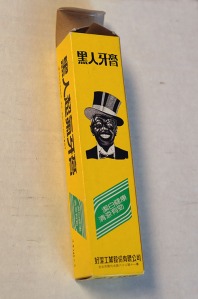