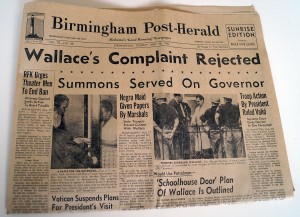 This May 28, 1963 edition of The Birmingham Post-Herald shows a cover story of “Wallace’s Complaint Rejected“.  Other stories include “Negro Maid Given Papers By Marshals“, “Schoolhouse Door Plan of Wallace Is Outlined” (this describes in detail how the Governor intends to defy the U.S. Marshals who will attempt to enroll the first African-American), “Desegregation Proposals Coming” which states “unless all signs fail, another filibuster by Conservative Southern Democrats is likely to greet any new civil rights measures in the Senate.”  Other articles include “RFK Urges Theater Men To End (Negro) Ban” and “Troop Action By President Ruled Valid“.