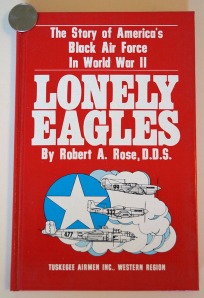 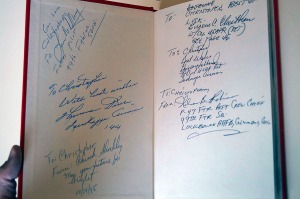 This Tuskegee Airmen book Lonely Eagles is signed by 6 Tuskegee Airmen, with at least 2 of them identifying themselves as being part of the famed 99th Fighter Squadron.  The Tuskegee Airmen were the first African-American military aviators in the United States armed forces. During World War II, Black Americans in many U.S. states were still subject to the Jim Crow laws and the American military was racially segregated, as was much of the federal government. The Tuskegee Airmen were subjected to racial discrimination, both within and outside the army. All black military pilots who trained in the United States trained at Moton Field and Tuskegee Army Air Field, located near Tuskegee, Alabama, which included five Haitians from the Haitian Air Force (Alix Pasquet, Raymond Cassagnol, Pelissier Nicolas, Ludovic Audant, and Eberle Guilbaud).

The 99th Fighter Squadron was initially equipped with Curtiss P-40 Warhawk fighter-bomber aircraft. The 332nd Fighter Group and its 100th, 301st and 302nd Fighter Squadrons were equipped for initial combat missions with Bell P-39 Airacobras (March 1944), later with Republic P-47 Thunderbolts (June–July 1944), and finally with the aircraft with which they became most commonly associated, the North American P-51 Mustang (July 1944). When the pilots of the 332nd Fighter Group painted the tails of their P-47s and later, P-51s, red, the nickname “Red Tails” was coined. The red markings that distinguished the Tuskegee Airmen included red bands on the noses of P-51s as well as a red rudder, the P-51B and D Mustangs flew with similar color schemes, with red propeller spinners, yellow wing bands and all-red tail surfaces.