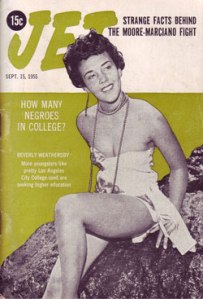 Many historians say that it was seeing the photos of Emmett Till’s mutilated body in THIS ISSUE (Sept 15, 1955) of Jet Magazine that sparked the Civil Rights Movement.  Rosa Parks said that she thought about going to the back of the bus, but when she thought about Emmett Till, she couldn’t do it (her refusal to give her seat to a white man occurred 95 days after Till’s death). The other 5 Jet Magazines in this collection show cover stories relating to Till’s death: “Will Mississippi Whitewash the Emmett Till Slaying?, Emmett Till’s Ghost Haunts Natchez, Where is Third Man in Till Lynching? How the Emmett Till Case Changed 5 Lives, Emmett Till’s Mother Starts a New Life.”

Emmett Louis Till (July 25, 1941 – August 28, 1955) was an African-American teenager who was murdered in Mississippi at the age of 14 after reportedly flirting with a white woman. Till was from Chicago, Illinois, visiting his relatives in Money, Mississippi, in the Mississippi Delta region, when he spoke to 21-year-old Carolyn Bryant, the married proprietor of a small grocery store there. Several nights later, Bryant’s husband Roy and his half-brother J. W. Milam went to Till’s great-uncle’s house. They took Till away to a barn, where they beat him and gouged out one of his eyes, before shooting him through the head and disposing of his body in the Tallahatchie River, weighting it with a 70-pound (32 kg) cotton gin fan tied around his neck with barbed wire. Three days later, Till’s body was discovered and retrieved from the river.

Till’s body was returned to Chicago. His mother, who had raised him mostly by herself, insisted on a public funeral service with an open casket to show the world the brutality of the killing. “The open-coffin funeral held by Mamie Till Bradley exposed the world to more than her son Emmett Till’s bloated, mutilated body. Her decision focused attention not only on American racism and the barbarism of lynching but also on the limitations and vulnerabilities of American democracy”. Tens of thousands attended his funeral or viewed his casket and images of his mutilated body were published in black-oriented magazines and newspapers, rallying popular black support and white sympathy across the U.S. Intense scrutiny was brought to bear on the condition of black civil rights in Mississippi, with newspapers around the country critical of the state. Although initially local newspapers and law enforcement officials decried the violence against Till and called for justice, they soon began responding to national criticism by defending Mississippians, which eventually transformed into support for the killers.

Problems identifying Till affected the trial, partially leading to Bryant’s and Milam’s acquittals, and the case was officially reopened by the United States Department of Justice in 2004. As part of the investigation, the body was exhumed and autopsied resulting in a positive identification. He was reburied in a new casket, which is the standard practice in cases of body exhumation. His original casket was donated to the Smithsonian Institution. Events surrounding Emmett Till’s life and death, according to historians, continue to resonate, and almost every story about Mississippi returns to Till, or the region in which he died, in “some spiritual, homing way”.