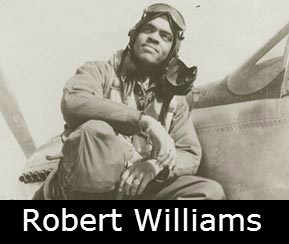 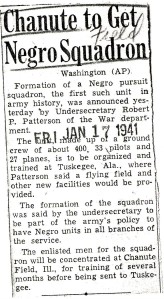 Robert W. Williams, the persistent patriarch of the Tuskegee Airmen, who spent 43 years bringing the significance of that all-black flight squadron to the public’s attention, has died.

Williams was 75 when he died Monday at his Pasadena home, his daughter, Robin Wood, said Wednesday.

Williams, a decorated pilot with the Alabama-based group in World War II, labored for more than four decades trying to persuade film and TV producers to record his story of the small group of black men who served their country despite entrenched racial discrimination.

Finally, in 1995, HBO produced a film that Times television critic Howard Rosenberg called “the latest in a string of historical pearls.”

The film detailed how the “Fighting 99th”–the first squadron of black combat fighter pilots and the vanguard of nearly 1,000 black fliers–overcame racism for the right to serve their country, and emerged from the war wreathed with honor but with little public acclaim.

The Tuskegee Airmen /tʌsˈkiːɡiː/[1] is the popular name of a group of African-American military pilots (fighter and bomber) who fought in World War II. Formally, they formed the 332nd Fighter Group and the 477th Bombardment Group of the United States Army Air Forces. The name also applies to the navigators, bombardiers, mechanics, instructors, crew chiefs, nurses, cooks and other support personnel for the pilots.

The Tuskegee Airmen were the first African-American military aviators in the United States armed forces. During World War II, Black Americans in many U.S. states were still subject to the Jim Crow laws[N 1] and the American military was racially segregated, as was much of the federal government. The Tuskegee Airmen were subjected to racial discrimination, both within and outside the army. All black military pilots who trained in the United States trained at Moton Field and Tuskegee Army Air Field, located near Tuskegee, Alabama, which included five Haitians from the Haitian Air Force (Alix Pasquet, Raymond Cassagnol, Pelissier Nicolas, Ludovic Audant, and Eberle Guilbaud).[3][4]

The 99th Fighter Squadron was initially equipped with Curtiss P-40 Warhawk fighter-bomber aircraft. The 332nd Fighter Group and its 100th, 301st and 302nd Fighter Squadrons were equipped for initial combat missions with Bell P-39 Airacobras (March 1944), later with Republic P-47 Thunderbolts (June–July 1944), and finally with the aircraft with which they became most commonly associated, the North American P-51 Mustang (July 1944). When the pilots of the 332nd Fighter Group painted the tails of their P-47s and later, P-51s, red, the nickname “Red Tails” was coined. The red markings that distinguished the Tuskegee Airmen included red bands on the noses of P-51s as well as a red rudder, the P-51B and D Mustangs flew with similar color schemes, with red propeller spinners, yellow wing bands and all-red tail surfaces.

Photos not included in collection–only the poster.