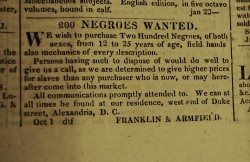 “Negroes Wanted” and “200 Negroes Wanted” advertisements.  COMPLETE front section of the Daily National Intelligencer, Washington D.C.  Wednesday, January 30, 1833.  First ad: “The subscriber wishes to purchase from forty to fifty Negroes of both sexes, form the age of twelve years to twenty-five.  He will exchange two 2 story brick Houses…for Negroes, or give the highest cash price.”  Second ad: “Two Hundred Negroes of both sexes from twelve to twenty-five years old, field hands or mechanics…determined to give higher prices for slaves than any purchaser who is now, or may hereafter come into this market.”

Both ads are on the bottom of the front page of a four-page-wide sheet, lithographed on rag paper, subscriber’s name is inked in the upper right corner with some very minor discoloration.  Large article on the front page about the formation of the Female Colonization Society, Auxiliary to the American Colonization Society for the aid of free people of color of the US on the coast of Africa.

Fold lines on rag newspapers can easily be flattened for display. 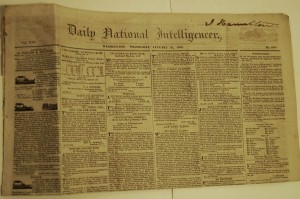