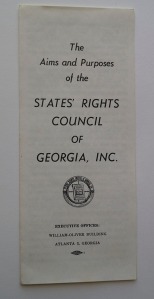 This brochure, titled “The Aims and Purposes of the STATES’ RIGHTS COUNCIL OF GEORGIA, INC.” states that it is “devoted to the maintenance of harmonious race relations in the State through preservation of the traditional establishment of segregation in both public and private places. It is the policy of the States’ Rights Council of Georgia, Inc., to stimulate cooperation on the part of both races to maintain the established pattern of life in the South and the integrity of both racial groups which have been living in harmony without outside dictation and interference for nearly 200 years.  The Council rejects and repudiates the use of force, intimidation or any other unlawful or unchristian means in the attainment of its objectives….Under the proper conception of states’ rights, this organization condemns the activities of any groups of any kind from anywhere coming into this State or going into other states with the ulterior motive of disrupting the orderly and constitutional operation of the law in such states.”

Officers OF THE STATES’ RIGHTS COUNCIL OF GEORGIA, INC.