“CONNOR FOR GOVERNOR” lead paperweight shaped like a bull. Bull Connor, one of the 3 most famous segregationists, became a symbol of the fight against integration for using fire hoses and police attack dogs against unarmed, nonviolent protest marchers.  Birmingham, Alabama’s  famous Police Commissioner Eugene “Bull” Connor ran (unsuccessfully) for governor of Alabama and gave away these lead paperweights shaped like a bull. 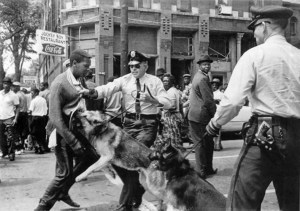 Theophilus Eugene “Bull” Connor (July 11, 1897 – March 10, 1973) was the Commissioner of Public Safety for the city of Birmingham, Alabama, during the American Civil Rights Movement.

Connor’s actions to enforce racial segregation and deny civil rights to Black citizens, especially during the Southern Christian Leadership Conference’s Birmingham Campaign of 1963, made him an international symbol of racism. Connor directed the use of fire hoses and police attack dogs against peaceful demonstrators, including children. These tactics backfired when the spectacle of the brutality broadcast on national television served as one of the catalysts for major social and legal change in the Southern United States and contributed to passage by the United States Congress of the Civil Rights Act of 1964.