These 6 racial “pulp” paperbacks from the 1950’s show how America has been titillated and scandalized by the issue of interracial relationships.

1950 The Winds of Fear by Hodding Carter.  Cover says “She brought trouble to a sleepy town.”  This is an angry novel that probes deeply into the ugly causes of racial tension in the South.  #300 vintage paperback.  Rear cover has a crease, and lower spine  is slightly worn on the bottom.  Slight gape between binding on copyright page and foreward, but look like a factory anomaly.

1951 Ninth Avenue by Maxwell Bodenheim.  Avon Books.  Headline says “HE LOVED HER TOO MUCH TO MARRY HER WITHOUT TELLING HER OF HIS NEGRO BLOOD!”

1951 Swamp Girl (original title No-Nation Girl) by Evans Wall.  “She brought the heat of the swamp to a white man!” “…beautiful, brown-skinned girl whose heart and body were the battleground of two opposing races.”  Fifth printing, Pyramid Books.

1951 The Golden Isle by Frank G. Slaughter.  “She took everything she wanted — even love!”  Artwork shows a man and woman (presumably the plantation owner) with slaves looking on.  Perma Books.

1954 The Wreck of the Running Gale by Garland Roark, author of Fair Wind to Java, Doubleday Perma Book.  “A surging exotic story of Yankee sailors and their native women they loved–filled with deeds of lust and fury.”  Cover has a bald black man with a whip standing over a cowering “native” woman (who looks like a white woman).

Imposed Rebellion by James Williams. “Bess Gordon knew the code of the South, but her passions were not to be denied.” 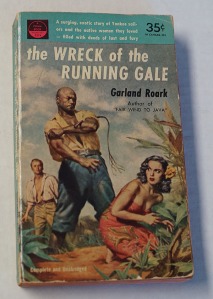 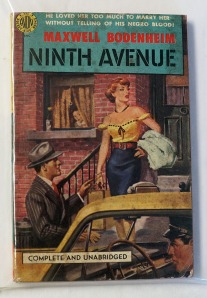 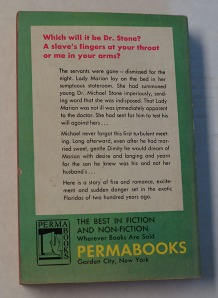 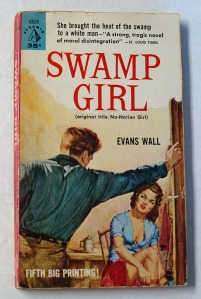